At the Rail 2013 Exhibiton we did set up our DSSG stand. During the 3 day's we had a lot of visitors and attention for the models and the S7 railway build by Ton Trip.

For an impression of our setup some pictures.


For modelling in the scale seven standards there is interest but change over is for the most modellers not easy. But we as Dutch Scale Seven Group we keep promoting S7 and hope that  more Dutch modellers will cross the line.

Our conclusion the Rail 2013 exhibition was a succes for this way of modelling.

For the last Scale Seven Newsletter we had not submitted our latest update you so here is a new report  from the DSSG. There are some projects we are working on that are making progress and still go on with the scale seven promotion in the .

At the Dutch 0 gauge weekend held last October in Zutphen we had a little stand with some  scale seven model engines. Cor gave a demonstration with his GWR 0-6-0 Saddle tank which he had converted from fine scale into scale seven. In this major rebuild the loco also got a DCC decoder and working CPL head lights. We demonstrated a rebuild loco with an inside motion and a very smooth running at the test track. Ton came with his beautiful 517 Class and his Pannier. Both engines were finished and ready to run on his “Tripton at Sea” railway.

For the promotion of scale seven in the the DSSG is invited to set up the promotion stand at Rail Houten, a small town near . This exhibition will take place at 22, 23, and 24 February in the Eurector-Expo-Center in Houten. At this exhibition the complete scale seven layout “Tripton at Sea” will be shown for the first time fully in operation for the public. , the proud owner of this layout, has finished his engines and wagons so he can demonstrate a layout build using the scale seven standards. Cor will also demonstrate his scale seven models at this layout such as the GWR 0-6-0 Saddle tank with complete working inside motion. Ton’s GWR 0-6-0 Pannier tank also has a working inside motion. The Dutch modellers at the show are always interested in our way of building models.

In our promotion stand we will show some models we are working on. GWR 0-6-0 Dean Goods, GWR 2-4-0 3500 Stella class under construction, Broad Gauge G.W.R 0-6-0 Armstrong Goods, a convertible engine and the beautiful BG Rover Class. Some wagons, BG coaches and the Cowan Sheldon railway crane. At the displays we will also put some Dutch wagons build by Cor in the scale seven standards. This is unusual in the because all the Dutch 0 gauge modellers use fine scale standards. But we will show that it’s also easy to build a finescale designed Dutch wagon kit in the scale seven standards.

In the last months we were busy with building some models.
The Minehead 1900 – 1910 railway is progressing slowly because of lack of time and the son of Cor who is building every Wednesday night at the Minehead railway was abroad for study during 10 weeks. But for this railway Cor build two Iron Minks and finished the Iron Cattle wagon. He also started to build two GWR Two Planks. For the Iron Minks and the Two Planks he used WEP kits and build all these wagons in the old version with grease bearings and a break on one side. The wagons are finished now and lettering is the last step to do in the  coming weeks.

Cor also started to build the GWR 2-4-0 Stella class. For this model he bought the M. Finney kit complete with a tender. An ABC gearbox with a Maxon motor will be used as the power source to get a smooth and realistic running engine. The wheels came from Slater’s and will be turned into scale seven standards by Cor.  He chose to build the roundtop version with the S4 boiler and a complete working inside motion.

For the Broad Gauge railway Kingswear Cor ordered from the Broad Gauge Society the G.W.R  2-4-0 William Dean 3501 Class. The BGS produced a kit for members of this Broad Gauge engine. This engine will be build in scale seven like all the other BG stock on this railway.  A nice kit to build was the Old Mink. This kit is also a product of the BGS. The body is CNC milled from Plasticard. The construction of the frame and compensation must be designed by the builder. Cor made an inside compensation and placed rivets in the body. These small rivets came from the German company GHW. Cor drilled the holes and glued the rivets into the small holes. In the whole body Cor used 330 rivets. 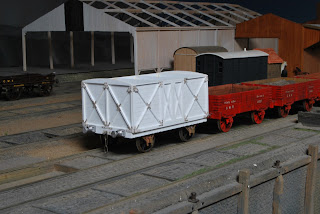 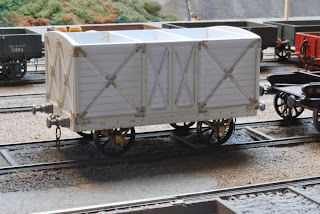 The broad gauge Kingswear  railway is setup in the workshop of Cor to look at it and when there is more time make progress and finish some parts.

Some pictures of the Kingswear Broad Gauge Railway. 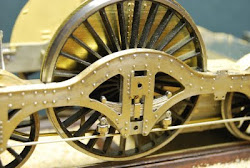